more people behind the story
‘Bernie’ was an inspiring teacher, who for some 30 years taught pottery at Dartington Hall School, having come to Dartington in 1932 with Bernard Leach.

Bernie was born in 1908 in Stoke-on-Trent and served an eight-year apprenticeship there as a modeller at Mintons.  After working for a short time in Italy he studied painting at Newcastle where he met Herbert Read who urged him to join The Leach Pottery in St. Ives.  When Leach came to Dartington Hall he brought Bernie with him, to build the original kiln at Shinners Bridge Pottery and to do some teaching at the school.

Becoming disenchanted with production work at Shinners Bridge – he vowed he would never again make two pots alike – Bernie’s involvement with the school became full-time.  At Aller Park and at Foxhole countless children developed an enthusiasm for pottery through Bernie’s gentle and committed teaching.  More than a few became professional potters.  Bernie also taught at the Adult Education Centre, which The Dartington Hall Trust housed and organised in Dartington village.

In his spare time, Bernie evolved his own style; porcelain bowls, dishes and vases decorated with jewel-like colours and designs reminiscent of Persia and the Eastern Mediterranean.  After he retired from teaching in 1968 Bernie’s creativity and output was unleashed and he had many successful exhibitions in England, Europe and America.

A retrospective exhibition of Bernie’s work was held at Dartington in 1988, to mark his 80thbirthday and to celebrate his long association with Dartington.  A number of his pots are in The Dartington Hall Collection.  Bernie died in 1990. 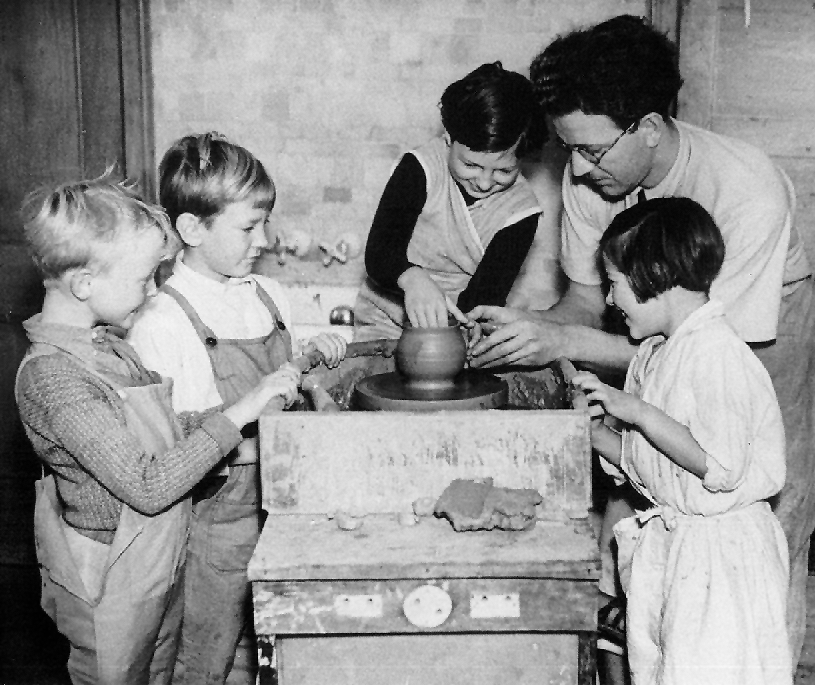