more people behind the story
Elizabeth Clough’s connection with Dartington Hall began in the mid-1980s, soon after Gavin Henderson became the Artistic Director of the Dartington International Summer School.

Her friend, the singer and teacher Esther Salaman, had been taking the singing workshops and masterclasses at the Summer School and she invited Elizabeth to join her.

“Elizabeth simply fell in love with the whole experience; she sang herself, listened intently to others in classes and concerts and talks and found all of it totally fulfilling.

Soon after experiencing the Summer School, she joyously found herself to be in a position to donate very generously to the Summer School funds and gave a number of bursaries which were greatly welcome.

The room in the East Wing (of Dartington Hall, named after her) was Elizabeth’s favourite! I stayed exactly opposite in the West Wing and we could wave across the courtyard. Her visits went on for about ten years until, in 1997 while on a holiday, she suffered a stroke.

Elizabeth then lived in a small seaside village near Cape Town with two nurses and her sister not far away. She listened to music most of the time and constantly remembered and missed Dartington. I am glad that she knows that she is remembered and appreciated.”

Elizabeth Clough did indeed give generously to the Summer School but that is not the reason a room in the East Wing is named after her. For many years she attended the Summer School, not as an organiser, an eminent teacher, or a performer but simply as a visitor. She found something special here.

Elizabeth represents the many thousands of people in the past 75 years who, like her, have neither lived nor worked at Dartington but as a visitor, found something different here and responded wholeheartedly to the place. Elizabeth died in 2003, leaving a very generous bequest to the Summer School. 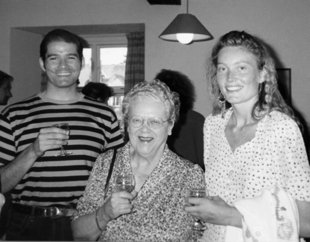