Elizabeth Peacock (1880-1969) was commissioned by Dartington Hall in the 1930s to produce the wall hangings that still grace the Great Hall today.

Between 1930 and 1938 she produced eight hand-woven banners to alleviate the acoustic problems in the venue – and to bring some colour and interest to the walls. Two more banners were added later.

Elizabeth Peacock has contrived to make the banners an organic part of the Great Hall; giving to her banners the scale, dimension and nobility that makes them now so indispensible a part of the whole.

Elizabeth was born in Staffordshire and was the youngest of three children. Her creative education began in 1900, when she started to receive private lessons from a Mr Whitely of the Birmingham School of Art.

In 1916 she left home to learn the art of weaving from Ethel Mairet, an expert in the use of vegetable dyeing, and together they moved into a hand weaving workshop at Stratford-on-Avon, later moving to Ditchling in Sussex.

By 1922 Peacock was working on her own, and in 1923 she had a stand at the English Woman Magazine Exhibition, (the magazine was part of the Suffragette Movement) at the Central Hall, Westminster with Jean Orage, Ethel Mairet and Phyllis Barron.

She was also among the weavers who exhibited at the International Exhibition in Paris in 1925. Peacock was the co-founder of the first Guild of Weavers, Spinners and Dyers. The Guild also produced a journal from the early 1930s to 1940. She was the co-organiser of The Whitechapel Exhibition, London in 1935 and from 1946 to 1956 she also ran her own summer schools at Redhill. The Whitechapel Exhibition was the first major exhibition in London of the Guild.

Peacock was always interested in new methods of weaving and when Alice Hinton (a pupil of Luther Hooper) stayed with her at Dartington from 1933-35, she learnt the art of drawloom weaving. Elizabeth and Alice also built a drawloom at her studio, ‘Weavers’.

She learnt worsted spinning from Miss Murray, a Shetland spinner, which led to the rediscovery of the principles which explained the rich qualities of some mediaeval wool clothes, and also related to experiments in building a handloom and a small hand-controlled mule then being made by Heremon FitzPatrick at Dartington. Peacock was invited to spin yarn and make up garments for a display for the 1951 Festival of Britain Exhibition in London. She was aided by a team of her students from Redhill.

She retired in 1957 after teaching for seventeen years and worked quietly in her workshop, absorbed mainly in the spinning and production of cloth of quality, which she wore. Aged eighty-four, she continued to produce ‘cottage tapestries’. Peacock corresponded with the Elmhirsts from 1928 to 1943.

Her success saw her sell enough work to build ‘Weavers’, her workshop at Clayton on the Sussex Downs. She lived here with her friend Mollie Stobart until her death in 1969. 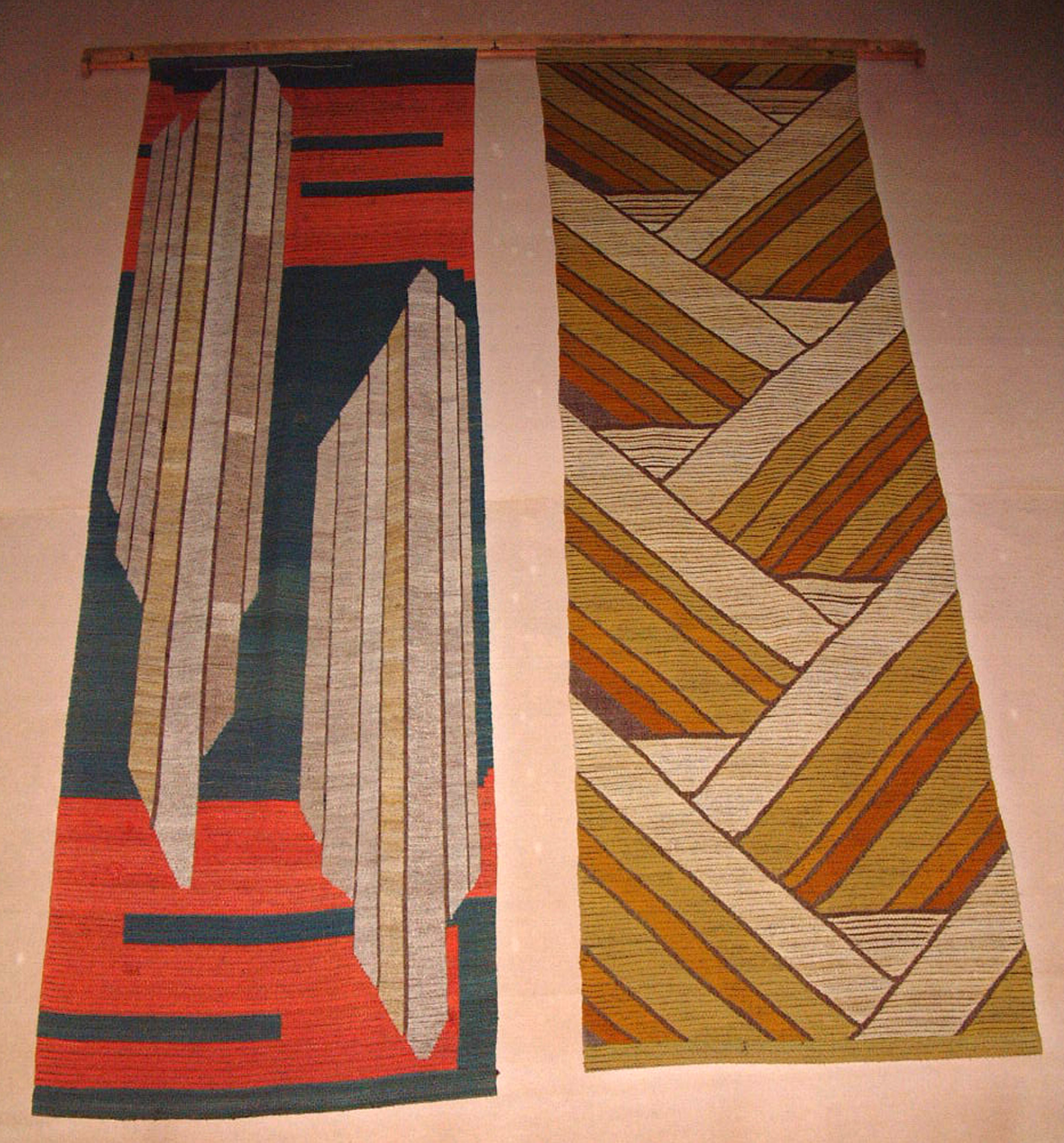