Finding a better wheat for the future

As more British growers embrace regenerative agriculture, there is a focus on growing wheat that is better for soil and human health. Schumacher College horticulture intern Michael Cooper is taking part in some wheat trials through the South West Grain Network. 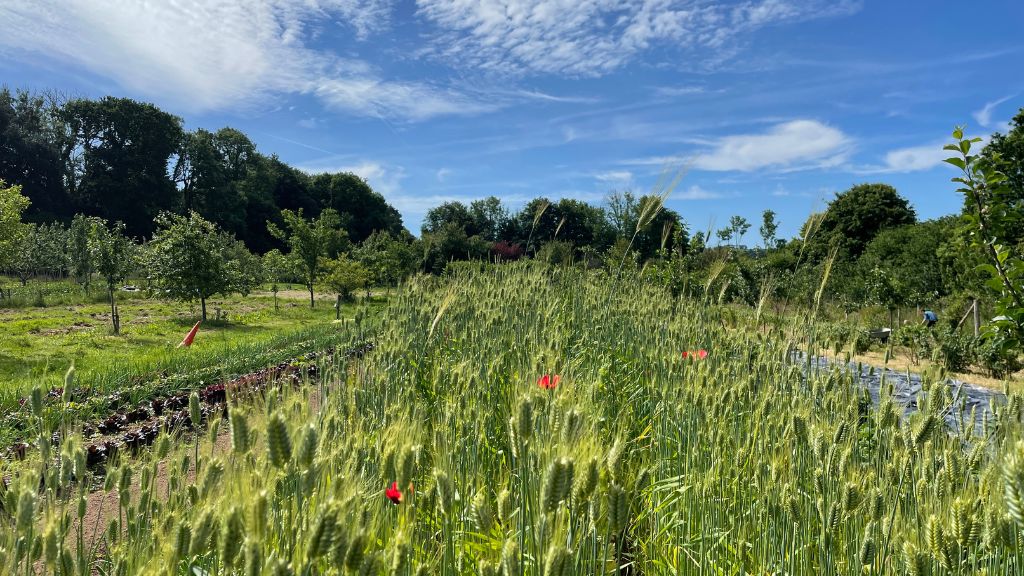 Michael Cooper was already an accomplished student before coming to Schumacher College with at least one PhD under his belt. But while the former glaciologist was happy collecting samples and scanning data, he felt he wasn’t able to effect the change he wanted; he decided the only way to make a difference was to get his hands dirty.

Now an intern, after completing the 6-month residency in Sustainable Horticulture last year, Michael has decided to focus his research on wheat, one of the most ancient of cultivated grains that has been eaten by humans for over 10,000 years; the name cereal comes from the Roman goddess, Ceres, who was deemed ‘protector of the grain’.

“I think I became interested in it because the story of wheat is so interesting,” he says.  “Wheat grains were among the first thing we started growing. Things like forest gardens are more like managed wilderness but planting grain was planned and intentional and it was used to make gruel or beer.”

In conjunction with the South West Grain Network (SWGN), Michael has been taking part in some wheat trials. The SWGN, started by Fred Price at Gothelney Farm in Somerset, aims to connect farmers, millers, and bakers and create a supportive community working towards a regional grain supply.

They provided Michael with two types of grain, both of which have very unromantic names of 15R and 9S, which he planted in November. He’s also sown his own trial wheat, a mixture of April Bearded, a variety which originated in the west country and was commonly grown in the UK from the mid-19th century until the 1950’s and Ölands, which originally came from the Swedish Island, an ancient flour which is good for sourdough. Both sets of wheat are planted in Henri’s Field at Schumacher College and are now being carefully monitored for growth, height, spread and productivity of each site.

Michael has also become interested in the evolution of wheat and how it has changed from a valued source of good nutrition to one which has been industrialised and commercialised. He explains how elements of production have been adapted to benefit productivity over quality, selecting wheat for its height or shelf life rather than nutritional value. All this is set against a backdrop of depleted soils and a loss of biodiversity so it has led to an ever-increasing reliance on inputs like pesticides and fertilisers to maintain productivity.

Sadly, Michael says, it has reached the point where much of the bread eaten today, has almost no nutritional value and has done significant damage to the landscape. He hopes that the renewed care for wheat and bread, which have been woven into many cultures and stories for the last 10,000 years, will help change that.

“Some people have put forward the theory that about the early humans who first grew wheat … did they domesticate plants or was it the other way round? It’s just a bit of fun but I quite like the idea that possibly plants domesticated us,” he jokes.

If Mike’s work has inspired you to get involved with the growing movement here at Dartington, there are more ways than ever to do so. Find out more about our pioneering horticulture and regenerative farming courses via the buttons below.