Food & Farming blog: What is agroforestry?

This blog was written by someone who has since left Dartington Hall. It’s still available to read because we love their work and the content of the blog is still relevant today, but you won’t be able to comment underneath. For general information about our charitable work, head over here.

I said that I would tackle the subject of agroforestry in this month’s blog, but before doing so, I thought it might be helpful if I gave a brief update regarding the re-letting of Old Parsonage Farm.

At the time I last blogged, we had just held the second of three planned viewing days at the farm. The final day was held at the end of May and attracted several repeat visits as well as new interest.

The range of applicants, together with the myriad ideas that they had, are causing us to eagerly anticipate opening the tenders from prospective tenants at the end of June. Next month’s blog should therefore not be missed!

Agroforestry – an important part of the Old Parsonage vision

As a reminder, the farm that we are currently letting extends to some 440 acres and there is a requirement for the successful tenant to plant 50 acres to agroforestry. 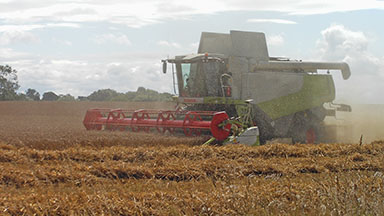 Typically, agroforestry can be divided into two types:

This is where trees are deliberately introduced into a forage system and the layout is such that a high-value tree component is produced, whilst continuing to permit grazing by livestock or the taking of forage crops.

More often than not, the pasture is permanent and grazed on a rotational basis, but it could equally be ploughed and re-seeded on a more regular basis and used for cropping silage or hay.

Trees can be planted in rows, clusters or evenly spaced, but inevitably browsing animals cause more damage to the trees than say sheep or chickens and so the expense of fencing can become a major consideration.

Here agricultural or horticultural crops are grown alongside a long-term tree crop. The most usual layout is for the trees to be planted in rows, leaving sufficiently wide alleys in between the rows, in order to allow the passage of standard agricultural equipment, such as a combine harvester.

In a silvo-arable system the protection of trees tends to be much cheaper – with individual tubes being the norm.

Autumn sown crops are particularly efficient users of light during the dormant season for deciduous trees.

What are the environmental benefits?

The silvo-pastoral system is considered to hold the greatest benefits for biodiversity and is deemed ‘Wood Pasture’ under the UK Biodiversity Action Plan.

However, with either system, it has been shown that invertebrates increase quickly following the establishment of the trees and this, in turn, leads to an increase in the number of both woodland and open-field species of birds.

The types of trees planted will depend on a number of factors, ranging from the desired rate of return, to the intended use of the final crop. Tree selection will also influence the planting pattern, since some trees need space to develop, whilst others do better with competition.

Planting can range from short term biomass species such as willow, through mid-term fuel wood, trees for fruit and nut production (eg: apples/hazel), to trees grown for their long term timber production.

Walnut is a good example of the latter, since it has different impacts and uses throughout its life. Being relatively slow growing, in its first few years it does not shade or otherwise impact on the adjacent arable crops.

However, as its canopy starts to extend and it begins to produce nuts, it starts to restrict the yields from the arable crop beneath it, but the loss of production is more than offset by the income received from the walnuts.

The final stage is when the trees reach maturity and can be harvested for their valuable timber. By then, cropping below the trees is restricted, but is unlikely to overly bother the farmer, who should be enjoying the financial benefits of furniture grade timber!