more people behind the story
For nearly 40 years the performance and teaching of the arts at Dartington Hall was largely developed and shaped by Peter Cox.

Peter came to Dartington in 1940, as assistant to Christopher Martin who had set up the Dartington Arts Department in 1934. After Martin’s death in 1944, Peter succeeded him as Head of the Arts Department and continued to develop Martin’s vision of Dartington as a local arts centre, a training ground for specialist teachers in music, drama, dance and art, and as a home for short courses and summer schools.

As Principal of Dartington College of Arts from its inception in 1961 until his retirement in 1983, Peter was instrumental in steering the college from performance related courses towards teacher training courses linked to the University of Exeter Institute of Education and, eventually, to degree status.

Peter developed a passion for India. The connections between Leonard Elmhirst and Rabindranath Tagore and Tagore’s University of Visva-Bharati in West Bengal, inspired Peter to foster at Dartington College of Arts courses in Indian culture and music.

At a time, in the 1960s, when Indian music was just beginning to arouse interest in Britain, Dartington College of Arts played a key role in developing that interest, by enabling the study, performance and promotion of both Indian and Indonesian music.

Peter’s retirement party was memorable, not least because the staff and students of the College of Arts imported an elephant into the Courtyard. Peter and his wife climbed on its back and completed a circuit of the Courtyard before exiting through the archway. After his retirement, Peter continued his connections with India, as a Director and regular visitor to The Elmhirst Institute of Community Studies, part of the University of Visva-Bharati.

Through his connections with Devon’s educational establishment Peter played a key role in developing cordial relations with the County. A significant outcome was a joint venture between Devon County Counciland The Dartington Hall Trust: the Devon Centre for Further Education. The Trust converted the East Wing, leased it to Devon County Council and the Devon Centre opened in 1963. For more than 30 years the County organised a succession of varied and successful day-long and residential courses at the Devon Centre.

In 1981 Peter was awarded the OBE for his contribution to education.

Bobbie, Peter’s wife, is a well-known weaver and two of her large pieces hang in the White Hart Dining Room.

Michael Dower, Director of the Dartington Amenity Research Trust and the Dartington Institute of Community Studies from 1967 to 1985, has kindly shared with us his tribute to Peter. It was delivered at his Memorial Funeral on 29 April, 2015. 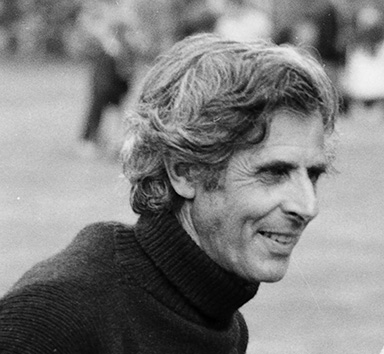