This blog was written by someone who has since left Dartington Hall. It’s still available to read because we love their work and the content of the blog is still relevant today, but you won’t be able to comment underneath. For general information about our charitable work, head over here.

‘Twas indeed a Blue Monday for some and, if you’re of a sensitive disposition you may wish to look away now as what we’re about to share with you isn’t pretty.

It transpired that, having been checked the previous evening, there had been a dog attack on several of their sheep in the early hours of this morning.

These were last spring’s lambs which members of the community had invested in, had been reared at Castle Meadow in Totnes and brought to Staple Field, owned by The Dartington Hall Trust, in the village of Dartington to finish and go into their lamb share scheme in just a couple of weeks.

Two sheep were dead and several others had torn and scuffed wool around their throats which suggests they had a lucky escape. Though no one saw the attack take place a vet came out to inspect the sheep and confirmed it was a dog attack.

This is a horrible thing for anyone to come across in a field – the sheep obviously met a horrendous end – but it’s particularly upsetting to those who have carefully reared and cared for them and whose livelihoods depend on these animals. 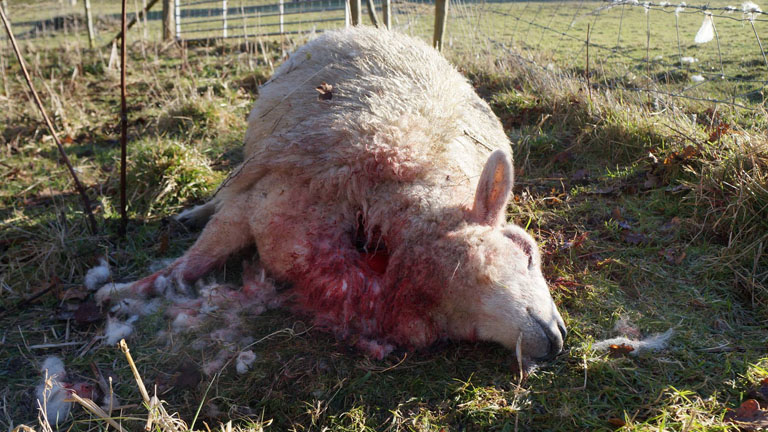 Why are we sharing these upsetting images with you?

Because you have the power to stop such events happening in future. There will be increasing numbers of livestock at Dartington and, whilst we welcome dogs onto the estate, we need dog owners to be responsible.

In fields where livestock are present, or as you approach a field containing livestock, dogs need to be kept under control. Under control means they always come back to you the very first time you call them, if they don’t then they ought to be kept on a lead.

Whilst your dog may not have it in them to commit quite such a vicious attack simply being chased can cause sheep health problems. They can injure themselves trying to escape or miscarry if they’re in lamb.

All farmers here on the estate need the support of the Dartington community and visiting dog walkers to keep their animals and livelihoods safe – the cost of these dead sheep to Little Bo People is about £200, plus vets bills and the cost of disposing of the carcasses, on top of the stress of the situation.

In recognition of increasing livestock numbers on the estate in future and to endeavour to prevent repeats of such incidence as these Dartington will be working on a new Dog Policy over the coming months to try and balance the needs of tenant farmers and Dartington visitors.