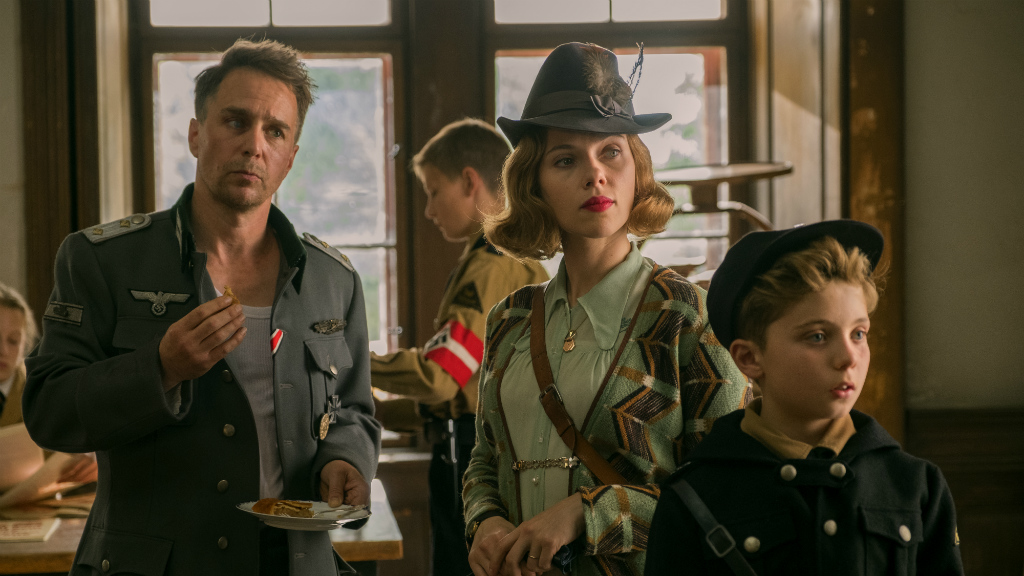 The Barn Cinema’s Ali Donkin reflects on her Programmer’s Pick for January, Taika Waititi’s Jojo Rabbit. You can watch Jojo Rabbit at the Barn Cinema from Friday 10 to Thursday 16 January. Book tickets here.

Springing out of a half remembered recommendation from his mother comes one of the most outlandish film premises of recent memory. The mind boggles to think of the pitch meeting when Director Taika Waititi suggested a warm hearted comedy drama about a child in the Nazi Youth who’s imaginary friend is Hitler. Caging Skies, the novel on which Jojo Rabbit is based was never a comedy, so it’s a fair question to ask why Waititi felt the need to add levity to a subject that is anything but funny.

The works that Watiti is arguably most famous for (if you exclude intergalactic thunder Gods) are his bitter-sweet coming of age tales, often featuring a boy with a yearning for a father figure who is distant or damaged. Here that theme is taken to its extreme, a child’s imagined perfect version of a man who is in reality a monster, built on propaganda he happily believes with a heartbreaking innocence.  Previous incarnations of this theme (Boy, Hunt For The Wilderpeople) have been set in the landscape and culture of Waititi’s home, New Zealand, but the subject in Jojo Rabbit has a personal connection with its director in a different way. Waititi describes himself as a Polynesian Jew (he used to be known by his mother’s name Choen), adapting a piece of work that had an impact on his mother and clearly himself as well, as the film’s many years of development prove. The humorous approach used in adapting the work is therefore not throw away, it is a choice, and a very carefully considered choice. Humour is how Waititi deals with painful subjects like abandonment and bereavement so here persecution and war get the same treatment.

Waititi is far from the first director to deal with the Nazi atrocities through humour. In fact one of the most iconic satires of the Third Reich came right at the start of the War before the US had even entered; Charlie Chaplin’s 1940 masterpiece The Great Dictator. Chaplin had been uneasy about some unfortunate parallels between himself and Hitler. They had been born just four days apart and through accident rather than design ended up with a similarly recognisable look. Rather than shy away from any strange links, Chaplin used this to create one of cinema’s greatest works of satire, using his specific talents to send a message the only way he knew how, playing a version of the dictator that would use laughter against him, recognising the power of ridicule against those who crave power and respect. Using comedy to belittle these ideologies would later be seen in films such as The Producers in a more farcical fashion, but here Chaplin’s tone is sharp and unflinching, but still keeping to the comedic styling that makes his work distinct. The film was incredibly well received by contemporary audiences with five Oscar nominations and came to be Chaplin’s most commercially successful film. It was Chaplin himself who would later express any unease about the film, saying that if he had known the extent of the concentration camps he would not have made the film, but The Great Dictator is still held up as one of cinema’s most important contributions in standing against Nazi ideologue.

Another theme Waititi’s film explores is a child’s eye view of war. The innocence through which children may initially view terrible events or horrendous ideologies is highlighted in many films throughout history, recently in 2008’s The Boy in The Striped Pajamas or the fascinating Lore (2012), both films dealing with the consequences of that innocence being broken. Jojo Rabbit however may have more in common with Spielberg’s classic Empire of The Sun, J.G. Ballard’s autobiographical account of his time in a Japanese POW camp. You are taken on a journey with your young protagonist from total innocence and blindness to the horrors of his situation, only seeing through him everything as an adventure or a game, until reality comes crashing in. It’s this perspective shift that makes the pathos of the film all the more real, this new way of viewing the conflict that the viewer knows is destined to end in the most heart breaking of ways when reality dawns.

How you view Waititi’s new feature will certainly depend on how much you enjoy the tone of his films and how that resonates with you personally. The film has certainly split audiences, getting voted People’s choice at Toronto International Film Festival (a usual sure fire sign it’s on its way to Oscar gold), but with some people not chiming with it at all. For me it is that contextualizing and humanising conflict that is still important when telling stories about the darkest times in human history. The change from childhood to adulthood is something that we can all relate to, in circumstances that most people thankfully can’t, but telling a difficult story in a deeply accessible way can bring important issues to a wider audience.