The story of the elder child and only daughter of Leonard and Dorothy Elmhirst, and the Wimbledon competitor and army veteran she married.

As a baby and young child Ruth’s domain was the top floor of the Private House (now the Elmhirst Centre) in the Courtyard at Dartington. She was the elder child and only daughter of Leonard and Dorothy Elmhirst, the founders of Dartington Hall as it is known today. Born in 1926, a year after Leonard and Dorothy were married and shortly after they purchased the Dartington Hall estate, Ruth’s early years were formal and highly structured.

She was largely in the care of a nanny/governess and two nursery maids and saw little of her parents who were busy establishing Dartington, travelling or entertaining guests. Ruth was in her teens before she was allowed to dine with her parents; something she never forgot, forever resented and never repeated with her own children.

The thatched Playhouse on the heather bank below the Great Lawn (now the Gardens Manager’s office) was built for Ruth and in 1929 it became Dartington’s nursery school, with Ruth and ten other children as the first pupils. Later, she was a boarder at Foxhole (the senior school at Dartington) and revelled in the freedom offered there. At the outbreak of World War II Ruth was on holiday in the USA and she stayed in New York, with her brother and their governess, for the duration of the war. Having completed her education at Sarah Lawrence College and developed an abiding love of music, Ruth returned to Dartington in 1946.

Ruth married Maurice Ash in 1947. Their first home was at Dartington, in Warren Lane, and it was here that Ruth began the work she would later take further: spinning, dyeing and weaving. Ruth and Maurice moved to Essex in 1950 and for the next twelve years Ruth was contentedly busy raising their three daughters, and a son who died at a young age, and creating a lovely garden.

Ruth, Maurice and their children moved back to Devon in 1962, to Sharpham House and its estate, on the River Dart below Totnes. At Sharpham Ruth again created a beautiful garden and took up weaving once more. She also became actively involved in Dartington: singing in choirs, teaching spinning, as Chair of the Gardens Committee and as a Trustee of The Dartington Hall Trust. Ruth had many talents but had little confidence in her abilities and always, at Dartington, felt herself in the shadow of her parents. She probably never realised how much, in her own right, the people of Dartington loved and respected her.

Ruth became ill with Motor Neurone Disease and died, aged 60, in 1986. A tree on the Great Lawn was planted in remembrance of Ruth and part of her bequest to Dartington was used to fund the creation of the garden in the outer courtyard.

A competitor at Junior Wimbledon, war service in the Desert Campaign and in Greece, a degree in Economics from LSE – these were the experiences and qualifications Maurice brought with him when he first visited Dartington Hall (and occupied a room in the East Wing) for a research project in 1946. Neither he nor anyone else can now remember what he was researching but coming to Dartington changed the course of his life. In marrying Ruth he found a family more congenial than his own and Dorothy, in particular, he found inspirational.

During their years in Essex Maurice owned and ran two farms, owned a restaurant, began his book of philosophy and commuted to London to his ‘proper’ job with The Town and Country Planning Association. He founded the Harlow Arts Trust and became a close and trusted friend of Henry Moore. In his spare time he sailed, played tennis and enjoyed his children.

The move to Devon and to Sharpham enabled Maurice to set about restoring and inspiriting a neglected but magnificent house and estate. More than 30 years later Sharpham flourishes: with the College of Buddhist Studies and Contemporary Enquiry, a successful vineyard, a dairy farm and a creamery making the renowned Sharpham cheeses.

Inevitably, Maurice and Dartington converged. He became a Trustee and, a few years before Leonard’s death, Chairman of the Trust, a position he held for 12 years. During that time he initiated many projects for the Trust: the setting up of the Beaford Arts Centre in north Devon, Dartington Glass, the Cider Press Centre and the Dartington Easter Conference, among others. For several years he combined his work at Dartington with his work in London (Chairman of the TCPA and of the Green Alliance) and overseeing one of the farms in Essex.

Maurice retired from Dartington in 1993 but continued to write, particularly for Resurgence magazine, and to be actively involved with the enterprises at Sharpham. As much as he loved Dartington, Maurice considered the greatest achievement and enjoyment of his working life to be the establishing of the vineyard at Sharpham. In Who’s Who he listed his recreation as, ‘applying Wittgenstein’. Maurice died in 2003.

Ruth and Maurice’s three daughters live in Devon and the eldest, Kate, was a Trustee of The Dartington Hall Trust from January 1992 until March 2010.

Further reading: In 2015, the Association of Guilds of Weavers, Spinners and Dyers received a donation of £3,500 from Marian Ash in memory of her mother’s involvement with the organisation. 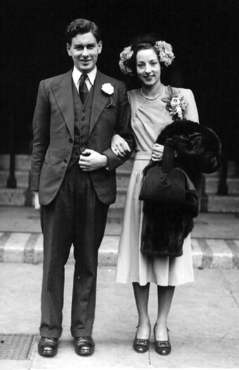