Bookbinding and printmaking classes have long been part of Dartington’s Craft Revolution programme and are held all year round.

The workshops are home to unique expertise and equipment, and are among the best in the south west. Visit the What’s On section to see the latest dates and contact details or call 01803 847000 for general enquiries.

All levels of experience from beginners to experienced artists can be accommodated.  Enrolment is for day or half-day classes over a ten-week term.

In printmaking, there is a huge variety of different approaches and media which students can experiment with. There are facilities for all forms of etching and intaglio printing, block printing and lithography, together with a range of other experimental approaches.

The printmakers have done a lot of work with children in schools and with teachers. There is an emphasis on the use of non-toxic materials.

The bookbinding department has the capacity to enable students to gain knowledge of typography using lead and brass type as well as brass hand letters and decorative tools.

Students can choose to work on their own projects in restoration, artist books, boxes, portfolios or related subjects. There is a comprehensive library of reference books and numerous examples from non-Western traditions of bookmaking.

Regular newsletters are received from the Society of Bookbinders, the British Printing Society, the University of the West of England Books Arts, and the Illustrated Book Society. At the centre, the Society of Bookbinders offers specialist courses with visiting tutors, and students are encouraged to participate in the biennial competition and attend training conferences.

The classes are led by skilled bookbinder Mary Bartlett, author of several works including Inky Rags – see below.

About Inky Rags – a book by Mary Bartlett

In an age when there was no easy means to reproduce text a school would often consider purchasing a letterpress both for economic and educational purposes.

Working a letterpress enabled a school to print its own material, thereby avoiding the costs of professional printers, while at the same time offering its pupils the chance to learn important intellectual and technical skills. It was mainly for these reasons that many private and public schools took up bookbinding and letterpress printing in the 1920s and 1930s.

It is perhaps no surprise, therefore, to discover that from its inception, in 1926, Dartington Hall School seriously considered setting up its own ‘Publishing Department’ so as to supervise the production of a school magazine and thereby teach pupils “the technique of letterpress, designing, bookbinding and printing”.

But these early ambitions were not fully realised until the Spring of 1935 when the School finally acquired a second-hand Albion Press for the princely sum of £18. Although the Elmhirsts were clearly supportive of the venture it was no doubt the vision of Charles Inman that brought this project to fruition.

Soon after the Dartington School press began to roll, Bill Curry (then headmaster), appointed Charles McNally (Mc) onto the staff of the newly opened junior school. It was not too long before Mc became involved in the Publishing Department having first taught himself bookbinding and then, subsequently, attending a series of Summer Schools run by the Institute of Handicraft Teachers in Loughborough and York. It was here that he first met with and was taught by the bookbinder John Mason.

When Charles Inman finally retired in 1947 Mc took over the running of the Publishing Department and for the next 39 years was to play a pivotal role in its development. An important teacher in his own right he would also advise the Elmhirsts in technical matters to do with their book collections and publications and was also actively involved as the main binder for The Dartington Hall Trust Archives. One of his finest achievements was the binding of the Gustav Holst manuscripts.

Mary Bartlett, who became Mc’s pupil in 1975, took over the running of the Department after Mc’s death in December 1986 and has continued to develop it ever since. Taking as a starting point her own memories of a long and fruitful career, Mary recounts a history of Letterpress Printing and Bookbinding as it has developed on the Dartington Hall Estate from 1935 until the present day.

This is a fascinating and important chapter in the story of Dartington which also includes details of a number of characters of significance in the History of the English Fine Press tradition: William McCance, John Mason & Guido Morris, to name just a few of the printers, binders and papermakers who had direct dealings with Dartington.

This book, published by Itinerant Press, also contains an important reminiscence of John Mason and George Percival by Rigby Graham; a series of fascinating reminiscences from some of Mc’s old pupils, including Breon O’Casey; a comprehensive bibliography of the works produced by Mc and Mary Bartlett; 20 (mainly) colour photographs as well as a reproduction of an original Rigby Graham which Mary Bartlett has printed onto Tuckenhay Mill Paper.

Inky Rags is the eighth publication from Itinerant Press and has been designed and printed by Philip Kuhn. It is no longer in print. 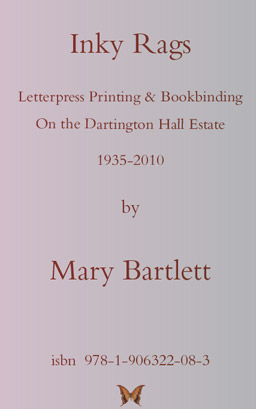