Willi Soukop is best known at Dartington as the sculptor of the bronze ‘Donkey’ (1935) and the granite ‘Swan Fountain’ (1950).

Both these sculptures in the gardens at Dartington Hall have become integral – even symbolic – features and are much loved by residents and visitors alike.

Willi came to Dartington Hall in 1934, at the suggestion of Kay Starr, Leonard Elmhirst’s secretary, who had met him in Vienna and knew him to be anxious to leave. In the 1930s Dartington became a refuge for several artists and performers seeking escape from the Nazi regime in Europe. Like Kurt Jooss with his ballet company, Michel Chekhov and his troupe of actors, and Hans Oppenheim and Hein Heckroth, Willi was given space and opportunity at Dartington to work and to teach.

His studio was the little thatched summerhouse opposite the White Hart and he was a part-time teacher of sculpture in Dartington’s Arts Department (later the College of Arts). He later taught at the Adult Education Centre, which was run by The Dartington Hall Trust in Dartington village.

At a time when Willi was penniless, the Gardens Superintendent at Dartington suggested Willi should make some sculptures suitable for gardens, which could then be shown at the Dartington Hall stand at the Chelsea Flower Show. The Bronze Donkey was one of these. It did not sell at Chelsea but Leonard Elmhirst bought it for Dartington and before long it became a focal point for a walk round the gardens and much loved, especially by children.

Leonard and Dorothy Elmhirst commissioned the Swan Fountain specifically for its site, at the head of the Tiltyard and close by the Azalea Dell. Initially there was some concern that this sculpture looked too ‘new and bright’. Someone was dispatched to the farm and for some months afterwards the swans were liberally and repeatedly covered in manure. It did the trick.

Like many refugees from Germany and Austria, Willi was interned for much of the war. Later, Willi and his wife, Simone (whom he had met at Dartington), lived in London where he continued to work and teach. Dartington was always special to Willi and he visited regularly until his death in 1995. 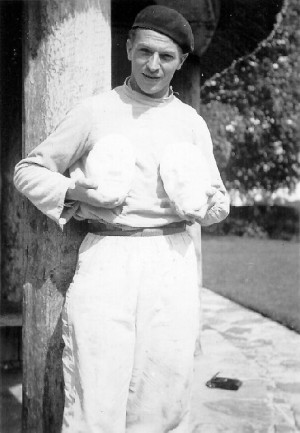