Everyone at Dartington has been saddened at the news of the death of dancer, teacher and choreographer, Mary Fulkerson, a major influence in the development of New Dance, and leading figure in dance at Dartington College of Arts from 1973 to 1985.

Along with American Nancy Topf and colleagues in Illinois (Joan Skinner, Marsha Paludan, John Rolland), Mary became a pioneer of the Release technique, which influenced contemporary dance through the use of imagery placed within the body and sensory-based movement exploration based on this imagery. It offered dancers a fundamentally new and different way of learning movement from that of ballet and modern dance training. As such she achieved what has been called ‘a quiet revolution’, turning away from effortful approaches of classical and other mainstream Western approaches to dance. 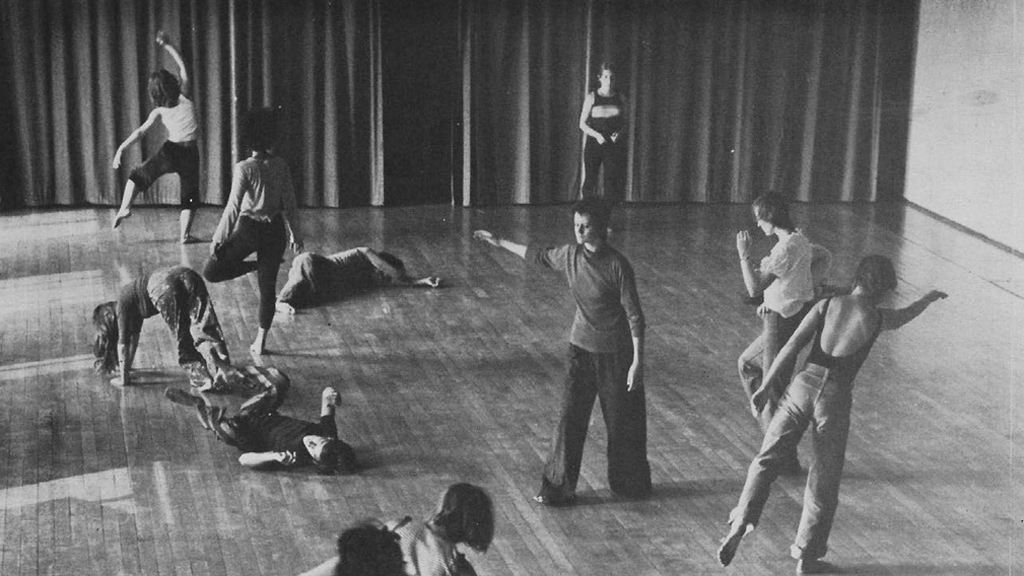 Coming to Dartington in the early 70s Mary paved the way, along with Steve Paxton, to turning Dartington into a truly international, innovative centre for experimental dance. Mary has been credited with being initially responsible, possibly more than anyone else, for bringing the idea of what we now refer to as somatic dance to Europe. Somatic dance meant dance that focussed more on the internal, the physicality of the performer, rather than the effect on the audience, and her writings on dance in general show a deep understanding of the connection(s) of mind and body. Published while at Dartington in 1977, this short excerpt from Language of the Axis gives a great insight into her approach:

“The image falls through the body, deeper and deeper, and then it gets light and spacious. It is present without effort. The image suggests the movement … Energy is seen naked … When mind and body are united the result is a very simple, direct expression of intention. The person becomes transparent.” (Fulkerson 1977, p. 93)

For those interested in exploring Fulkerson in more detail, Language of the Axis is a good place to start, if you can get hold of it. But you can also read excerpts from the book Release: Seven Zones of Comprehension Coming from the Practice of Dance, here.

There is another excellent resource containing extensive material from her notebooks 1966 – 2010 (Note: this page also includes a fun fitness routine workout programme also presumably by Mary called “the hotel room sized route to fitness”, which feels like a prescient forerunner to today’s trends for Yoga with Adriene/Joe Wicks-style home workout videos!)

It’s clear from various accounts too that Mary was an inspirational teacher. Daniel Lepkoff, himself going on to become an important figure in Contact Improvisation, gives a vivid account in an online article called “What is release technique?”: “In Mary’s classes we worked with developmental movement as the source of a basic vocabulary. We studied and practiced rolling, crawling, walking, running, falling, and the transitions between these patterns. Mary had a system of anatomically based images that mapped out functional pathways through the architecture of the body.”

He goes on to explain nicely what Mary’s classes were aiming to do. “An important aim of the technical work in Mary’s Release classes was to draw the body closer to channelling its action along these pathways. This would both realign the body so that weight was supported through the center of the bones as well as re-pattern the flow of energy so that action was initiated by the muscles closest to the body’s center. This shift would release the outer muscles of the body from holding weight and free them for what they were meant to do, namely move the body.”

Another student of Mary’s at Dartington, Linda Hartley, writes too of her experiences of learning from Mary, of how classes would begin “with 10 minutes of gentle running around the perimeter of the studio, padding softer as our bodies let go of tensions and found a fluid strength and stamina. She would offer suggestions for clear alignment and use of the body as we ran, inviting our bodies to absorb information that would encourage ease and fluidity. This simple ritual would be followed by some stretching and rhythmical exercises, before we were invited to lie on our backs on the floor, close our eyes, and allow our attention to turn towards the inner world of the body.”

Mary continued to dance and attract attention for her solo performances. A review in the New York Times of her solo ‘Real Adventures’ refers to “an extended solo of startling beauty and pleasure, set, like the rest of the program, to string music credited to Jim Fulkerson and Paganini. Miss Fulkerson’s connection with the music and its rhythms was intimate – simultaneously systematic and free – as she expanded with the music or darted into it like a needle into smocking … One had a sudden vision of Diaghilev’s surprise as he watched Dalcroze’s strange music-explorations, or of Isadora Duncan’s early audiences as they saw her embody music”.

But to give Mary the last word, this excerpt (taken from her website) seems to sum up something of her legacy beautifully:

“I believe in the vast and real forces that affect lives today – and that these forces may be turned towards the good. I believe that each person who dances or creates dance is capable of incredible statements that fill the world with light. I am certain that Release, and Dance Making/Choreography are visionary fields of discovery and invention. However small each of us is, as we create, we reach for the stars.”