more people behind the story
German ballet director Kurt Jooss (1901-79) came to Dartington in 1934 with his dance company the Ballets Jooss and the Jooss/Leeder School of Dance.

Siguard Leeder had worked with Jooss since 1924 on a joint dance programme and was his associate both artistically and in the dance school.

The school and the ballet companies were rescued from Nazi Germany through the far-sightedness and generosity of Leonard and Dorothy Elmhirst, the founders of the modern Dartington Hall Estate.

Jooss and his company were based at Dartington until 1940, enjoying with other artists, many of whom had also escaped from other war-torn countries, the support and encouragement of the Elmhirsts.

The company based themselves in Devon for rest, rehearsal and the preparation of new ballets.  Members of the Dance School, already established at Dartington, were profoundly influenced by the influx of professionals and the artistic reputation of Dartington was enhanced. Their arrival marked a shift away from a concentration on the amateur which had previously characterised Dartington.

In 1931 Jooss devised his most famous ballet, The Green Table, which won first prize in the Concours de Choreographie, hosted by Les Archives International de la Danse in Paris.  The ballet, an anti-war piece, has been revived since by the Birmingham Royal Ballet and is still pertinent today as it was when first performed.  It was choreographed in Labanatation, a system developed by Rudolf von Laban who was the ballet master of Jooss.

The Elmhirsts had a very impressive Modernist house designed for Jooss by the architect William Lescaze, which had its own dance studio.  This house, known as Warren House, still stands on the estate at the end of Warren Lane. 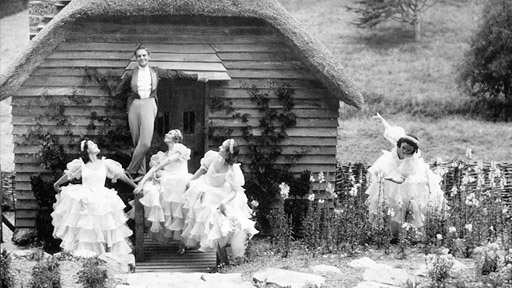