more people behind the story
It is doubtful that anyone at Dartington Hall knew more about the place, its people and its history than Mary Bride.

From the Nursery school to gaining her Higher School Certificate, Mary Bride was educated at Dartington Hall School, where her parents were on the staff. After leaving the school she trained as a secretary and worked briefly for the Bursar at the school and then in London, at the Council of Industrial Design and at the American Embassy.

In 1956 Mary Bride went to New York and worked as the Personal Assistant to the Director-General of the British Information Services and before she returned to England she completed a three-month, 12,000 mile tour of the USA. Her appetite for adventurous and independent travel was probably formed at that time.

Mary Bride returned to Dartington in 1962, when invited by Dorothy Elmhirst to become her personal secretary. She worked for Dorothy until her death in December 1968, and was then ‘transferred’ to Maurice Ash, Dorothy’s son-in law and a Dartington Trustee.

She combined her work for Maurice with caring for Leonard Elmhirst’s household needs and looking after the extensive and varied works of art belonging to The Dartington Hall Trust. Maurice became Chairman of the Trust in 1972 and Mary Bride remained as his secretary throughout his Chairmanship.

When Robin Johnson retired as the Trust’s Records Officer in 1984 Mary Bride took on the role of Archivist, which she combined with the curatorship of the collection of paintings and ceramics. A year later she was asked to take over as Secretary of The Elmgrant Trust, a charity founded by Leonard and Dorothy to support their interests beyond Dartington.

The office of The Elmgrant Trust was situated in on the top floor of the East Wing for a number of years, and is still based on the estate with an office located in Dartington Space.

Following her retirement from The Dartington Hall Trust in 1991, Mary Bride travelled extensively abroad. She was an active member (and Chairman) of the Dartington Community Choir, which she was instrumental in founding in 1982, and which continues to play a key role in the musical life of Dartington today.

When Mary Bride passed away in 2018, aged 86, the Dartington flag was lowered in respect to her remarkable life – and the impact she had on so many who passed through this place. 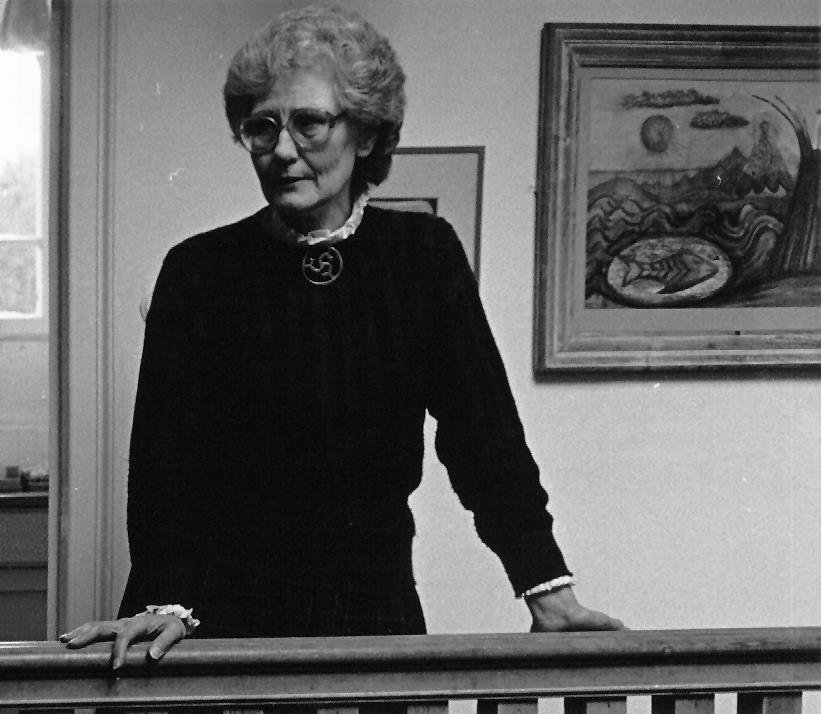